Dale Harcombe lives on the beautiful NSW coast. She is a writer of fiction and poetry for adults and children. She’s here today to talk about her book ‘The Goanna Island Mystery’ and particularly to focus on the importance of setting. 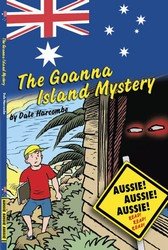 Legend says that the ghost of a pirate haunts the tiny Goanna Island. Leo, new to the area, decides to investigate one day, when the local bully dares him to visit the island. Leo doesn’t really believe in ghosts — until he sees a pale face peering at him from a window.
Who is on the island? Are all the legends true?

1. Is the setting for The Goanna Island Mystery real or imagined?

Goanna Island is a combination of two real islands with some imagined. One island was up at Fingal Bay and unless you went by boat it was only accessible at low tide.. The other is in Sydney Harbour. I added the Goanna shape to make the island even more Australian and not tied in to any real place so much.

2. When writing fiction, do you generally use settings from real life,
or are they total invention?

I often use real life – The setting for Chasing After the Wind was very much real life. I lived for many years in Western Sydney, so knew the Parramatta/Granville area well. Much of the research of Parramatta in the Depression came from Parramatta library and from local newspapers of the time.
In Lights, Camera Action and Saltspray Idol, two books coming out later this year, even though the setting is imaginary, Saltspray is not too unlike some of the areas around where I live. However, part of Saltspray Idol is set in Sydney. That is based on many years living in Sydney, so is firmly in the realm of reality.
In Karaoke Kate it was a totally imagined farm. Red Alert! was based on a real camp, but of course the name was changed and some of the details and incidents invented. Sometimes it’s hard to remember what actually happened and what was imagined. Novels I have written for adults tend to be a combination of real and imagined setting too..

What is the most challenging part of creating an appropriate setting for your stories?

The most challenging part is making the setting believable. The author firstly needs to be able to visualise it, so that they can then convey enough of the specific details to ensure the reader can visualise the scene. Setting can play an important part and in a way be almost another character.

For a story you need plot, character and setting. In what order do you develop these?

Mostly I start with character and then see where that character takes me. But in The Goanna Island Mystery it started with the island, which is what I mean about sometimes the setting becomes another character. In Chasing After the Wind I specifically wanted to write about a child from Western Sydney because I think Western Sydney is not well represented in children’s fiction. Having lived there for many years I know some of the strangely held attitudes, even people from other parts of Sydney can have to Western Sydney and those commonly referred to as ‘Westies.’ The experience of living in Western Sydney is often quite different to people’s perceptions and the media’s portrayal of the area. Sorry, that’s a little bit of a hobby horse of mine.

What aspect of setting is the most important for you? The physical surroundings or the atmosphere, or are they indivisible?

They all blend in a bit. I try and use the senses as much as possible. Not just the visual but the sense of smell or taste or hearing. They are the details that make a setting come alive.

Do you ever reuse settings?
I did re-use one setting in two young adult books, which tied them loosely together as a series. They were to be published until the publisher went bankrupt. For the moment, they’re still bottom drawer dwellers, something I suspect all writers have a few of. One day they will emerge into the light.

What’s coming up for you?

Term 3 will see the publication of Lights, Camera, Action and Saltspray Idol. Like most writers I have manuscripts with publishers awaiting the green light and several projects at various stages of writing or re-writing.

Where can readers find your books?

Anyone wanting to buy a signed copy of The Goanna Island Mystery can contact me via my website www.daleharcombe.com

Otherwise The Goanna Island Mystery is available from Blake Education RRP $9.95 Here’s the link to the site.
http://www.blake.com.au/Aussie-Aussie-Aussie-Set-2-The-Goanna-Island-p/9781921255199.htm

Monday 25 May Dee White at http://tips4youngwriters.wordpress.com
Tuesday 26 May Sally Murphy at http://aussiereviews.blogspot.com/
Wednesday 27 May Mabel Kaplan at http://belka37.blogspot.com
Thursday May Here!
Friday 29 May Sandy Fussell at www.sandyfussell.blogspot.com