Both Jude and I were keen to finally see copies of the book. Hmm. The books weren’t there! Julie Wells of the CBCA SA launched this book-that-wasn’t-there and then Jude talked about all her books (her work is fantastic) including the-one-that-wasn’t-there. Hmm again. An interesting idea really, launching a book without the book. Was quite funny really, but perhaps only because copies did finally appear! Then I read the book while Jude showed the illustrations. The audience were lovely and laughed at all the right times and said nice things afterwards. A good way to finish!

On Tuesday, I spoke to three classes at Goolwa Primary School. Nan Halliday (who wears many hats and had at least two on that day) drove me through the beautiful Fleurieu Peninsula countryside to the school. On our arrival we followed a snowflake path to the library to be greeted by a snow storm (constructed by the children after reading Snow Play). 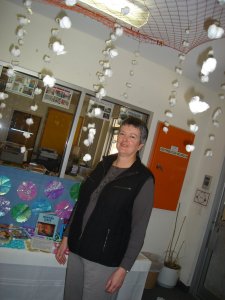 Further in, there were two seascapes with many boats (including a display around Ebi’s Boat). 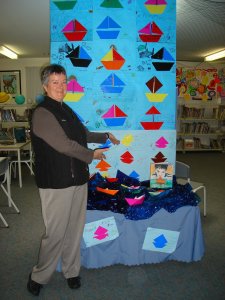 Where I was to speak was also decorated, this time with many chooks! There were chooks on the wall, chooks on a barnyard table complete with hay and eggs. (for my books A Nest for Kora and Snow White and Grubby). It was such a lovely way to start the sessions. I had a wonderful time and have seldom felt quite so welcome. 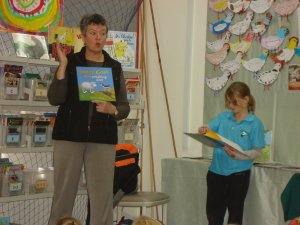 While I was in Adelaide, my blog tour began and is now continuing it’s journey around Australia.

Check out these blog stops: