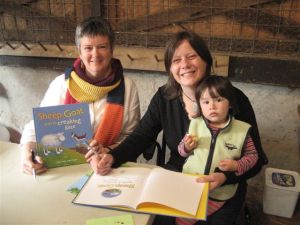 ‘Sheep, Goat and the Creaking Gate’ was launched on Sunday at Collingwood Children’s Farm. I was up early making final adjustments to the cake and making sure everything was ready.

We were at the Farm early but not as early as many of the families for family day. It was Family Day, and goats were the feature and there were goats everywhere. Kids and nannies and billies. As we were setting up, we were serenaded by some gorgeous long-legged kids, welcomed by curious chooks (the biggest chooks you could hope to see) and assisted by Farm staff.

Launch went well, and included Sally, the goat, and her pining amour, Tripod who called to her from the other side of the barn. My brother, David, stepped in at the last minute to MC the launch and did a great job. Bridget, weekend farm manager who launched ‘Sheep Goat and the Creaking Goat’ confessed to a small distraction as she saw that Sally was a bit too close to my foot and began to worry that she (Sally that is) might wee on my shoe!

After Bridget had launched ‘Sheep, Goat..’, I read the book and Jude showed the pictures. We gathered a few passersby who slowed and stayed to listen to the story.

The sun shone, the air was warm, and all was well with the world. The gate cake was a hit, the sheep fairy bread (thanks Kim, Natalie and Michael) disappeared as did the sheep and the goat biscuits (thanks Jude).

Thanks to everyone who came and to those who couldn’t make it but wished us well. It was a fun day.

‘Sheep, Goat and the Creaking Gate’ is now well and truly launched! I’ll post more photos as I can.