Funny Fantasy Fiction: How it all comes together.

Today I welcome Ian Irvine, writer of fantasy series for adults, children and almost anyone in between. He’s here to talk about his ‘Grim and Grimmer’ series for 10- 14 yo children. The final instalment in this four part series is ‘The Calamitous Queen’. 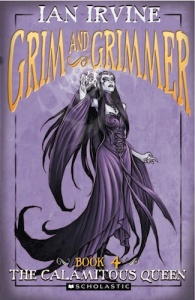 Fantasy is not generally a genre that includes humour – indeed it is often quite the opposite. Why did you decide to add humour to the mix?

Precisely for that reason, Claire. I’ve written a lot of big fantasy novels – indeed, these are the books I’m best known for – and, though they do have humorous moments, in general they’re epic in tone. Similarly, my Runcible Jones books and my little, illustrated books for mid-primary readers, the Sorcerer’s Tower series, are serious rather than humorous.

But I don’t want to become typecast as a writer, and at the end of each series I like to challenge myself by writing something completely different. There are lots of humorous books written for children, and there’s lots of fantasy too, though often the humorous stories don’t have a really strong plot and the fantasy isn’t funny. Some writers have combined the two, notably in the Artemis Fowl and Bartimaeus books, though these are aimed at slightly older audiences. I love strong, driving plots, so I thought, why not have a go at combining the two, and Grim and Grimmer is the result. Readers can find blurbs, reviews, covers and first chapters here: http://www.ian-irvine.com/grimgrimmer.html.

You’ve written a number of novels in series for adults, as well as for children. Do you ever see yourself writing single titles, or do you feel that fantasy plot lines always need more than one volume?

Thus far, all 27 of my books have been in series, and in the case of the 11 Three Worlds books for which I’m best known, http://www.ian-irvine.com/threeworlds.html, a series of series. I write the kind of books I like to read, but I also enjoy telling epic tales where one needs a big canvas. However as it happens, I’m considering writing some single titles once my current series is completed next year, just to do something different. And also because series represent an enormous commitment of time and creativity, years of work in most cases. This can close off smaller opportunities because a big series, once underway, has so many deadlines.

And then, if one writes a one-off book and it does really well, the publisher is bound to ask if there’s a sequel …

When you conceive a new series, is it world, character or plot that first grabs you?

I rarely start with a character. Sometimes it’s a plot idea, sometimes an interesting story world. For instance I once had an idea for a series about a war against the Gods, though I never ended up writing it. With the Runcible Jones books, it was the setting – Earth is twinned with Iltior, a world where science has been suppressed and magic holds sway. For thousands of years the two opposite worlds have been in balance, each subtly influencing the other, but now Earth’s rapid advancement has upset that balance.

Once I have the story world and plot sketched out, I then develop several characters and begin plotting in detail. It’s almost impossible to do detailed plotting without character development because the plot is created by the choices that characters make in each difficult situation they face. Different characters with different backgrounds will necessarily make different choices.

Do you have to consciously construct the humour? Not everyone shares the same sense of humour, do you test it on trusted readers? If so, what age are they?

In the first book of Grim and Grimmer, ‘The Headless Highwayman’, I did consciously construct a lot of the humour because It wasn’t something I had much experience of doing. In the subsequent books I’ve constructed some humour, the rest I simply let flow as I was writing the draft. By creating eccentric, highly incompatible characters and putting them into absurd situations together, sometimes the humour comes naturally.

For instance with Ike, the hero of the books. Ike is brave and kind and well meaning, but he’s not very bright and tends to get himself into disastrous situations. Within a few minutes of arriving in Grimmery, he’s accidentally betrayed Princess Aurora to her enemy, the Fey Queen Emajicka. A few minutes later, Ike is caught and chained a violent, obsessive guard-imp called Nuckl whose sole ambition is to eat Ike’s liver.

I don’t test the books on readers, but when everyone in my publisher’s office loved the first book I figured I was on the right track.

How do you choose character names? Some seem to reflect their personalities e.g. Emajicka, Spleen and Nuckl, while others like Pook, Ike and Mellie give away little of their nature. Is this intentional?

Yes, it is. Names are always difficult; they have to sound right for the character. If I’m reading the manuscript and a name jars, I know I have to change it, and sometimes I’ll change a name many times before I get it right. The major characters in this series have relatively ordinary names. Ike’s real name is Isaac Newton, which is meant to be ironic because Isaac Newton was the greatest scientific genius of all time and Ike is a dunce. Mellie’s name is Melliflua di Sorrowgrove, an extravagant name for a little thief, but all her family are thieves and in Grimmery it’s a proud and (fairly) honourable profession.

Yes, always. The language level has to be right for the readership, and so does what I write about. For instance, in the Sorcerer’s Tower books, which were only 10,000 words each and aimed at readers 7-10 in age, I consciously simplified the sentence and plot structure and description, reduced the character list to a minimum, used only a single viewpoint and chose smaller words wherever possible. And of course, graphic language, sex and violence are quite inappropriate in books for children.

With epic fantasy novels of 200,000 words each, themselves part of a series four times that length, the author has an extraordinary freedom to create vast canvases with multiple viewpoints and complex plots that can take years or decades to resolve. Fantasy readers (unlike, say, romance readers) don’t have rigid expectations. An author can write what he likes as long as it’s a compelling story set in a well drawn fantasy world with believable characters.

What/who did you read as a child/teenager?

That was a long time ago, since I grew up in the Sixties. As a child, I read everything I could get my hands on, fiction and non-fiction, books for boys, books for girls, The Women’s Weekly, you name it. As a teenager I read a lot of science fiction, but also a lot of crime and mystery and adventure. Hardly any fantasy, though. There wasn’t a lot of it around then. And once, when I was about 15, I found a cardboard box box full of Mills and Boon romances left by a great-aunt, and read through about 60 of them in a couple of weeks. My mind still boggles at the thought. It must have been a rainy vacation.

Grim and Grimmer is drawing to a close. What’s next for you?

I’m working on a big epic fantasy trilogy called The Tainted Realm, about a land that was brutally colonised 2,000 years ago, but the realm of the invaders has been forever tainted by the way they stole the land. The oppressed native civilisation, driven almost to extinction, vanished 1,500 years ago. But now they’ve reappeared, bent on vengeance and determined to take their country back …

The first book, Vengeance, will be published worldwide from October. There’s more information, and the first chapters, here: http://www.ian-irvine.com/taintedrealm.html.

I’m also tossing around ideas for another children’s or YA book or series, but I won’t begin one until after The Tainted Realm is finished.

Thanks Ian for the visits and the insight into how you work. I have to say, I’m still reeling at the idea of reading that many Mills & Boons titles! I was given an armful when I was in hospital having had my appendix removed, and that was during a fuel strike in Melbourne that meant no visitors for my week or so stay. Three books was all I could manage!

Ian’s in the middle of a big school and blog tour. Here’s where he’s been and where’s he’s off to next.