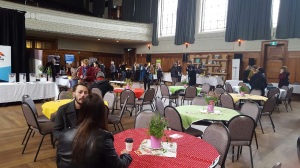 The Hub, for meeting and greeting and lunching and resting.

This past weekend was the 13th Williamstown Literary Festival. The festival was started by Catherine Ryan (at the time restaurateur, now librarian) and Angela Altair (Hobsons Bay councillor), and a group of volunteers. Initial challenges in the early years included building renovations, funding challenges.
It would be great to say that both these challenges have been completely overcome, but the wonderful Williamstown Town Hall, is still being renovated, although latest reports say that the end is in sight.
And as for funding – well that’s always a challenge, although thanks to sponsors like the council and Victoria Uni, Bendigo Bank and others, there is some measure of security.

I was thrilled that one of my poems, ‘After the Ferry’ was in the shortlist for the Ada Cambridge poetry prize which meant inclusion in the anthology, with the shortlisted works in all four categories. 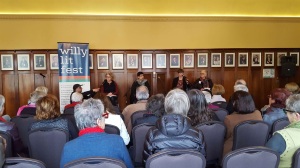 Sessions were diverse – this one discussed ways to improve intergenerational living as well as celebrating the ongoing achievements of all Australians, of all ages. Speakers: Renata Singer, Melanie Joosten, moderated by Enza Gandolfo. 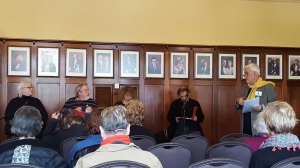 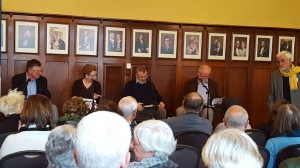 Local writers and historians offered insights into iconic industries of the west including sugar, glass, and sewerage. Speakers: Ian Rae, Carmel Taig, Robert La Nauze and David Maloney.
The glass factory was started by two pharmacists who needed bottles for their pharmacies. They went on to also manufacture the boxes for their glass bottles and the nails for the boxes! 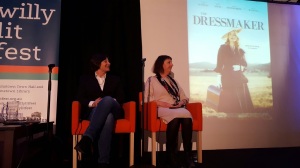 And this was the final session I attended. Before this, I was ‘in discussion’ with Paula Kelly talking about the often obscure historical snippets that build into stories. After this session, I had a workshop called ‘The Sense in Nonsense’ about deconstructing nonsense stories like ‘There Was an Old Sailor’ to understand the structure and then creating new stories.

Back to this session. This was Sue Maslin and Rosalie Ham in conversation with Bruno Lettieri about The Dressmaker and novel-to-film. Fascinating to hear about the development of the novel and then some of the backstory to the film eg the search for a village and for the perfect hill; costumes and more costumes.

A wonderful festival celebrating local and not-so-local creators of books and more, put together mostly by a small band of volunteers. They were joined on the day by more volunteers who made sure that punters found their way to wherever it was that they needed to go. As an audient and a presenter, I felt valued and supported and send out a huge thank you to the whole team.