On my walk today

It’s very easy to get caught in your own head, particularly as everything changes outside it.

Walking is my way of putting my world into perspective and reminds me that wonder surrounds me. It’s a wonderful writer’s tool also, reminding me to look closely, to see the extraordinary in the ordinary. To find the story in everything.

I’m wary of promising something I can’t deliver, but at least for today I’m offering an insight into on way to capture details. They may one day be part of a poem, or a story, but that doesn’t really matter now. I just want to show the layering that contributes to meaning.

Those details can be interrogated to make a story. Maybe. But not now.

On my walk today I saw a man walking dogs.

There were three dogs.

All were labradors. One was golden, one brown, the other black.

One had its own lead. The other two were on a joined-half-way-along lead.

I saw them twice. At the start of my walk, and part way through. The first time, the dogs were ahead of their walker. The second, they were behind.

About now, I got distracted by something else. And that’s okay.

But although three labradors are hardly enough, here is a picture I found. And that’s a whole other story … 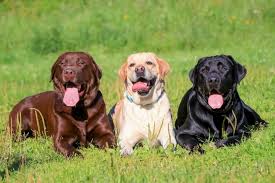